Plex comes with media server that can play and organize various audio / videos efficiently. This media player is also integrated with online service and makes users to access or collect media files across laptops, mobile phones, TV, Tablet, Xbox, Roku and other devices from number of sources. MP4 is mainly used as audio/video container in Plex media player.

However, some of the users face difficulties while playing MP4 files on Plex, such as “MP4 files not seen in Plex”, “Plex won’t play MP4 files”, and so on. This kind of situation might arise if MP4 video file header gets corrupt due to virus attack and other issues. MP4 video file will not play properly when you abruptly terminate Plex media player or sudden crash of Plex media server while playing MP4 file. Or unexpected system shutdown when MP4 video is opened in Plex media server even makes it not to play. Low internet connection while streaming Plex MP4 file via online also leads to same situation.

Other than previously discussed causes, there are various events due to which Plex cannon play MP4 file. Firstly, make sure you’ve added the directory to your library and updated it. Plex requires a special naming convertion for TV shows in order to download the metadata of them properly. If your MP4 videos are TV shows, please try to rename the MP4 files so they have simpler names (e.g. Series – S01E01 – Episode Name). Most time, I don’t care about the metadata. There is another solution. We can make a new library or pick Other or Personal Media and put the MP4 TV shows in there. After that, these MP4 files will show up and be streamed to TV.

If it does not help, more than likely it is a permission problem. You need to change the group ownership on the folders in which you save the MP4 files. Setting the permissions to be recursive is highly recommended. So the sub folders have the same permissions.

Tried all the suggestions above but still had the issue in recognise MP4 files with Plex? Don’t worry. Maybe the codec in your MP4 file causes such issue. MP4 is only the container which supports several video/audio codecs. According Plex official websites, native video support is typically limited to the MP4 container, H.264 video encoding, and AAC audio. So come MP4 files which contain other codecs may not be streamed well. Well, this is not a difficult problem once you get an efficient video tool like Wondershare Video Converter Ultimate. As a professional MP4 decoder, encoder, editor, burner, downloader and MP4 Player, Wondershare Video Converter Ultimate will help you to re-encode MP4 video to Plex compatible MP4 format. Its fast conversion time, high-quality output and extra features make it the perfect choice for video converter software.

Wondershare Video Converter Ultimate accepts all of the common media file formats such as MP4, MPEG, WMV, AVI, FLV, etc., 4K, H.265, 3D, and even some rarely used formats like NSV and RealMedia. Apart from media files, you can load DVD from your DVD drive, folder, or ISO/IFO files.

With more than 158 output options, you can convert your video to virtually any format. Some output options are conversion templates with optimized settings for playback on specific devices and platforms such as iPhone, Samsung Galaxy series, LG TV, PSP, PS3, PS4, and many more. You can even convert any normal 2D/3D video to 3D with its 2D to 3D converter.

Before converting your video, you can also do some basic editing with its useful editing tool. Easily trim, crop, rotate, flip, add effect, add watermark, add subtitle, and view the changes with the output preview. Certainly a handy tool that everyone will love to use when necessary.

What about its conversion speed and quality? This is probably your main concern if you convert videos and movies on regular basis. Wondershare claims that its product converts 30 times faster than other converters, which is certainly not true, unless it compromises majority of its quality for speed.

The Video Converter Ultimate is the best MP4 to Plex converter program in this regard which is to be used to get the best results. In order to get the things right the user needs to make sure that the following process is applied as it is explained:

To find out Wondershare’s conversion speed, I have done a comparison test with one of the top-rated and best free video converter – Handbrake. This test is conducted by using the identical video file and same conversion settings for both converter. Wondershare Video Converter Ultimate took 4 minutes and 50 seconds to convert a 2.5 minutes long MP4 video to MKV, whereas Handbrake took 15 minutes and 17 seconds to convert the same video (note that I was using a mid-end laptop with low CPU clock speed, you will probably get much better results).

If you are using a Mac user, please turn to the Video Converter Ultimate for Mac, which supports converting MP4 files for playing on Plex on Mac, include masOS Sierra, El Capitan, etc.

How to Re-encode MP4 to Plex supported MP4 formats?

The Video Converter Ultimate is the best program in this regard which is to be used to get the best results. In order to get the things right the user needs to make sure that the following process is applied as it is explained:

Step 1. Free download the best MP4 to Plex converter on your computer, install and run it.

Step 2. The user then needs to make sure that the required video in the MP4 format has been loaded by pressing the add files button: 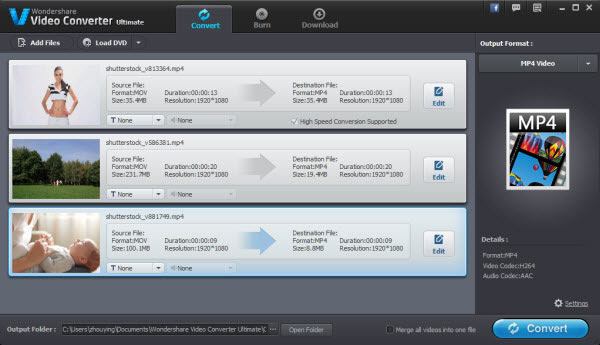 Step 3. The user then needs to make sure that the appropriate format is then selected so that the best Plex Media supported format for instance the mp4 format is used: 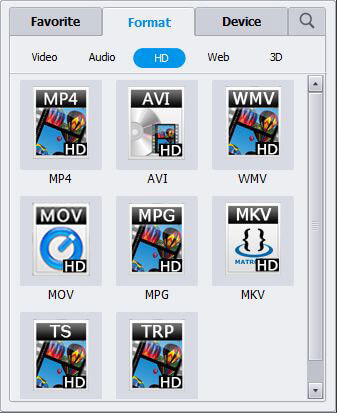 Step 4. The “Convert” button is now to be hit to make sure that the MP4 to Plex conversion process is completed: 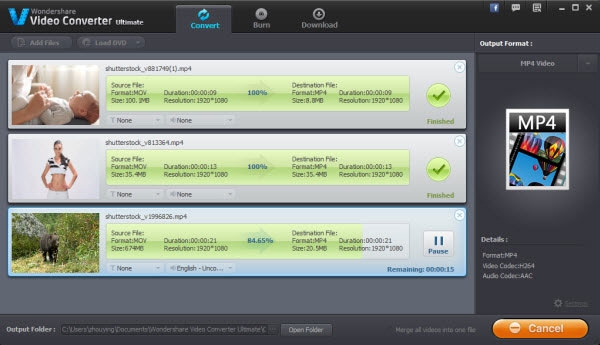 The above is a detailed guide on how to convert unsupported MP4 to Plex supported MP4 video in order to successfully play MP4 on Plex with no restriction.

When corruption of MP4 file is causing it to not play in Plex, then one can also rely on reliable video file repair utility to make MP4 file playable on Plex.

Download the MP4 Video Repair for Windows or Mac

Then install and run the best MP4 Repair for Plex on your computer. Now, please refer to the full gudide to repair MP4 to Plex readable MP4 video: http://www.hivimoore.com/product/video-repair/guide/

Now, you can play the converted or repaired MP4 videos on Plex. Open Plex and import the MP4 files into the library and use local network to stream from Plex with your iPad, iPhone, Roku, Xbox 360, Xbox One, PS4, Chromecast, etc.

How to Sync Music, Videos from PC/Mac to iPhone 6 (Plus) without iTunes

4 thoughts on “How to Solve “Plex Not finding a MP4 movie” problem?”